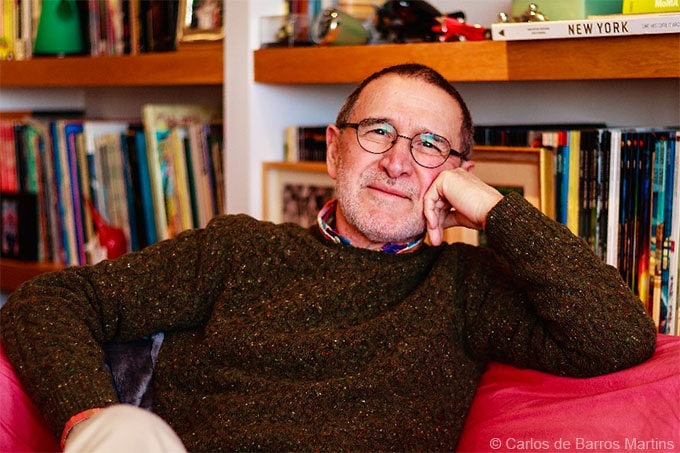 In the early 80s, António and Nuno Rodrigues were invited to work in the Portuguese A&R Department of label Valentim de Carvalho, where they worked as songwriters/producers for artists such as Gabriela Schaaf (2 SPs and LP LP “Vídeo,” Concha, Lara Li, José Campos e Sousa (LP “Josephine”), António Mourão, Marco Paulo and Gina Maria. And LP “Contos da Barbearia” with the band, Banda do Casaco.
He resigned from the job one year later and then, as a freelance worker, produced Rui Veloso’s debut solo album, “Ar de Rock”, for label Valentim de Carvalho.
Meanwhile, he received an invitation from Cláudio Condê – at the time the Managing Director of multinational corporation Polygram (Universal) – to work for the company. He accepted to work in the International A&R Department, with the condition to have the freedom to also work in repertoire and production for Portuguese artists. He worked 10 years, doing editing, events, meetings in several foreign countries, writing songs for several Portuguese artists.

It was during this hectic time simultaneously with the release of Dire Straits, Elton John, Peter Gabriel and Van Morrison’s records, to name a few, that António Avelar de Pinho wrote and produced for several artists signed with Polygram. Portuguese artists such as Avô Cantigas (with Carlos Vidal), Doce, Herman José, Tonicha, Rão Kyao, Heróis do Mar, Dina, Da Vinci, José Cid, Rita Guerra, Táxi, Dino Meira, to name a few.
During this period, he wrote comedy texts for Portuguese radio shows, such as “A Flor do Éter” and for television, the show “O Tal Canal”. Both were projects with Portuguese comedian Herman José.

In 1990, he founded the company “Companhia das Ideias, Audiovisuais” in order to create and produce work for TV and music.
Examples:
– “TOP+”, a weekly TV show about music (for which he hired first-timer Catarina Furtado and João Vaz), which he produced for RTP for a year.
By invitation from the musician himself, with whom be came friends with during his work in Polygram, Companhia das Ideias through António Avelar de Pinho, he assumed the role of manager of Carlos Paredes. He accompanied the musician in concert not only in Portugal but also in Spain, France, Belgium, Germany, India, China, South Corea, Russia, Brazil and Egypt.
– He created and co-wrote with António Cordeiro the fiction TV show “Claxon”, bought immediately by RTP and which became a cult TV show in Portugal. He produced with Ramon Galarza an LP “Claxon”, with original songs from several authors and singers.
– He created the weekly TV show “Vitaminas” for RTP, for children and young people, hosted by Carlos Vidal and António Cordeiro (within character Félix Fracasso).
He write 26 original songs for this show, collaborating with Pedro de Freitas Branco and composed by Carlos Vidal. The LP was produced by Ramon Galarza and released by Columbia (Sony).

For television, he wrote:
– He co-wrote with Pedro de Freitas Branco, adaptations for 3 big BBC sitcoms which SP Filmes (owned by Jorge Marecos Duarte) commissioned to Companhia das Ideias. These adaptations were broadcasted in Portuguese TV channel SIC, staring Portuguese actor Camilo de Oliveira (suggested by António Avelar de Pinho) but with concerns from Jorge Marecos and Emídio Rangel.
These shows were: “Camilo & Filho”, “Camilo na Prisão” and “ A Loja do Camilo”, huge hits on Portuguese television.
– several texts for comedy for Marina Mota Produções. Not only for the actress herself but also in some of her productions and other leading actors.
Examples: “Barba e Cabelo,” for Carlos Cunha. E “O Bom Baião,” for João Baião.

Lorem Ipsum is simply dummy text of the printing and typesetting industry. Lorem Ipsum has been the industry’s standard dummy text ever since the 1500s, when an unknown printer took a galley of type and scrambled it to make a type specimen book. It has survived not only five centuries, but also the leap into electronic typesetting, remaining essentially unchanged. It was popularised in the 1960s with the release of Letraset sheets containing Lorem Ipsum passages, and more recently with desktop publishing software like Aldus PageMaker including versions of Lorem Ipsum.